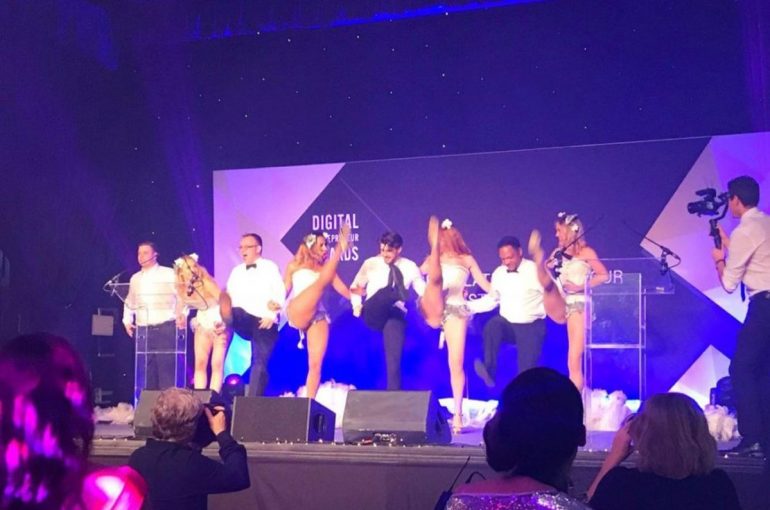 If you were following the news last week, there’s no escaping the coverage surrounding the disastrous Digital Entrepreneur Awards, held in Manchester on 22ndNovember. The event, sponsored by UKFast (one of the UK’s biggest hosting providers), is meant to celebrate advances in technology and the best digital talent in the industry.

Instead, this year’s event failed miserably, with a ceremony that many attendees deemed offensive, sexist and derogatory towards women. Guests were greeted by showgirls dancing on stage, clad in skimpy hot pants and corsets, setting an uneasy tone that didn’t improve as the night went on. The comperes for the evening cracked ‘jokes’ that some thought were in bad taste and would have even made Benny Hill squirm.

On the Digital Entrepreneur Awards website it states, ‘The Digital Entrepreneur Awards are the longest-standing national tech awards, having recognised Britain’s online offering for over a decade. Now in its 13th year, the DEAs have been a springboard to success for many of the web’s pioneers, underlining their hard work and innovation.’ So what went so wrong at this year’s event?

We were following proceedings on Twitter with interest, watching as the negative comments rolled in from people attending the ceremony. Two of the winners made national news last week after handing back their awards: Lab returned its Agency of the Year award and the University of Bradford handed back the award for its Don’t Go to Bradford campaign.

We spoke to Emma Bridge, Associate Director (Marketing Communications) at the University of Bradford to find out more. ‘Quite early on in the evening things didn’t seem right. The hosts were making inappropriate comments and sexist remarks about the dancers and award-winners – it was all very bizarre. I didn’t feel comfortable about the way women were being spoken to on stage and knew that if the University of Bradford won an award, we wouldn’t give an acceptance speech. I didn’t want to put my team in a situation where they would be made to feel uncomfortable.

‘Once we’d received our award we stayed and watched it get worse. There was a ripple affect on the tables; people were upset about the comments and general tone and it created an uneasy atmosphere. The whole event was based on the backdrop of a poor host who subjected people to sexist remarks all evening. In an industry that is so under-represented by women, it was incredibly disappointing.

‘The values of the ceremony didn’t reflect the values of our team at the University of Bradford, which is why we gave back the award – we are constantly striving for gender equality, particularly with our 50/50 campaign that aims to see complete equality in computer technology by 2020.

‘It’s a real shame, as the event was the perfect opportunity for organisers to address this inequality, but it only made it worse. The organisers clearly didn’t research the hosts or the core values of many of the companies that attended. Hopefully they will reflect on their mistakes, listen to what’s been said and next time use it as a platform to make a difference and actually recognise the challenges faced by our industry. I think they also missed the mark in the apology they issued.’

Organisers issued an initial response to the backlash, saying the event wasn’t sexist as it was ‘run by an all-female team’. That comment was later deleted and a new apology appeared on the blog.

Commenting on the event, Education Cubed Managing Director, Jo Redfern said, ‘The University of Bradford has stuck to its principles and values and I admire them for that. The team worked hard and were delighted with their win, I am sure. But there are wider issues at play here. The University often speaks about its ongoing commitment to shift the gender balance in tech, particularly with its 50/50 campaign, so I think the decision was the right one.

‘We will be working closely with the Bradford team to ensure that the campaign work we do for them reflects this. On a personal level, I commend them for supporting the equality agenda and it’s exciting to work with a team of people who have the same strong values as Education Cubed.’